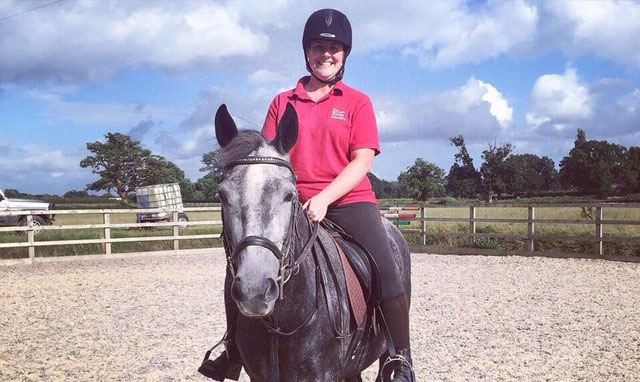 In 2009, Melanie Dunford suffered a nasty head injury whilst helping her friend prepare for a dressage event at her yard resulting in the Critical Care Team (CCT) being called. After the team on board the aircraft assessed her, they soon realised she would need to be airlifted to hospital. Below, you can read Mel’s story.

“As my friend perched on a box plaiting her horse, who was tied safely to the front of the stable, I stood beside them enjoying my coffee. Suddenly my friend lost her balance on the box and tried to steady herself on her horse. Spooked, the horse pulled backwards knocking a three-foot iron grill to the floor with me underneath it. The grill struck me on the back of the neck sending me flying forward. Smacking my head on the concrete floor beneath me, I was immediately unconscious.

“As the mare took off down the yard, I briefly remember waking up as somebody wrapped a horse rug around me. There was a lot of commotion and shouting surrounding me as somebody held my head. Shortly after, the road ambulance paramedics cut my clothes off and fitted a neck brace. They told me the Air Ambulance was on its way and for me not to worry.

“The Air Ambulance skilfully landed in a small paddock just outside the barn doors, and the team stretchered me into the aircraft. The amazing CCT strapped me to a spinal board and reassured me as they administered heavy pain relief. Much of the journey to Queen Alexandra Hospital I don’t remember, but I recall one of the specialist CCT paramedics telling me what a lovely view I was missing out on as we landed on the helipad.

“Minus soft tissue damage and bruising, the scans and x-rays came back all clear, however, the medical team informed me that had the iron grill hit me just a centimetre lower, I’d have potentially been paralysed from the neck down.

“Every day I am so thankful to the Air Ambulance and the crew who helped me on that awful day and despite the fact I am still able to ride and enjoy my ponies, I am conscious they are extremely unpredictable.

“I volunteered for HIOWAA for several years after my accident but eventually had to give up due to health reasons. Without Hampshire and Isle of Wight Air Ambulance, however, I might not be here at all.”