I slapped him around the face, shook his shoulders and shouted his name. I ran into the kitchen, grabbed the phone and dialled 999. ‘Is the patient conscious and breathing?’ ‘No, he’s not.’ ‘You’re going to have to do CPR on him’, she said. ‘Do you know how to do that?’

In the evening of Friday 7th February 2020, an evening like any other, Neil was at home with his wife, Ruth, daughter, Dawn, and son, Daniel. Out of nowhere, Neil suffered a cardiac arrest while watching television downstairs. Ruth, who works for the Crown Prosecution Service, who was working in the office upstairs at the time, tells the story of that day, and the weeks and months that followed.

It was around 10pm and Neil and my daughter, Dawn, were watching Father Ted in the lounge downstairs while I finished off some work in the office upstairs. Suddenly, the door flung open with my daughter stood in the doorway: ‘Daddy’s not breathing properly, and I can’t wake him up.’ I immediately got up and ran downstairs. Sat in his normal chair, he was making a gargling noise every 20 to 30 seconds – which I now understand was his body exhaling air – looking waxy and grey with his mouth wide open. ‘This isn’t right’, I thought.

I slapped him around the face, shook his shoulders and shouted his name. I ran into the kitchen, grabbed the phone and dialled 999. ‘Is the patient conscious and breathing?’. ‘No, he’s not.’ ‘You’re going to have to do CPR on him’, she said. ‘Do you know how to do that?’ ‘Well, sort of.’ I had first aid training back in 2003. ‘Get him on the floor’, she told me. I don’t know how much he weighs but it’s considerably more than me. As I threw him down his head hit the floor. ‘Goodness, I’ve given him a brain injury as well.’

As I picked him up from the chair, I discovered that he’d wet himself. I’ve read enough true crime books to know that people who’re dying can often wet themselves because their muscles relax. I knew this wasn’t good.

The call taker told me to shout one, two, three, four in the rhythm that I was doing CPR so she could hear how fast I was going. My daughter, only 13 at the time, took the phone and went to stand in the hallway. She would occasionally come back into the room: ‘She said go faster. The ambulance will be here in three minutes. She said you’ve slowed down; go faster.’

Do you remember the Vinnie Jones advert about how to give CPR? The one where he sings Stayin’ Alive. I had that playing in my head.

I was doing CPR for 10 minutes. It was absolutely exhausting. I’ve never done anything so physically demanding in my life. You go to first aid training and you learn how to do CPR but it’s with a dummy. You learn the motions, but when you’ve got a loved one dead on the lounge floor, which is what he was, there’s adrenaline, desperation and panic. I tend to cope quite well in a crisis; things need to be done and I just get on with it. But this was pure adrenaline. We later found that his heart had stopped for 20 minutes in total.

My son stood by the front door and turned all the lights on, so the medics could find us. The community responder, Dave, arrived first. He took over CPR and told me to go upstairs to be with the children. The road ambulance must have been hot on his tails. I phoned my mum who answered the phone very cheerily, ‘Hello’. ‘Neil’s had a cardiac arrest, the ambulance is here’, I told her. ‘Right, I’m on my way’, and she put the phone down. She didn’t say anything else.

Dr Ewan and HEMS Paramedic, Julian, from the HIOWAA Critical Care Team arrived and got to work on Neil. I felt so relieved that they were there. Now, with so many skilled medical professionals tending to him, there was a chance that Neil would survive. 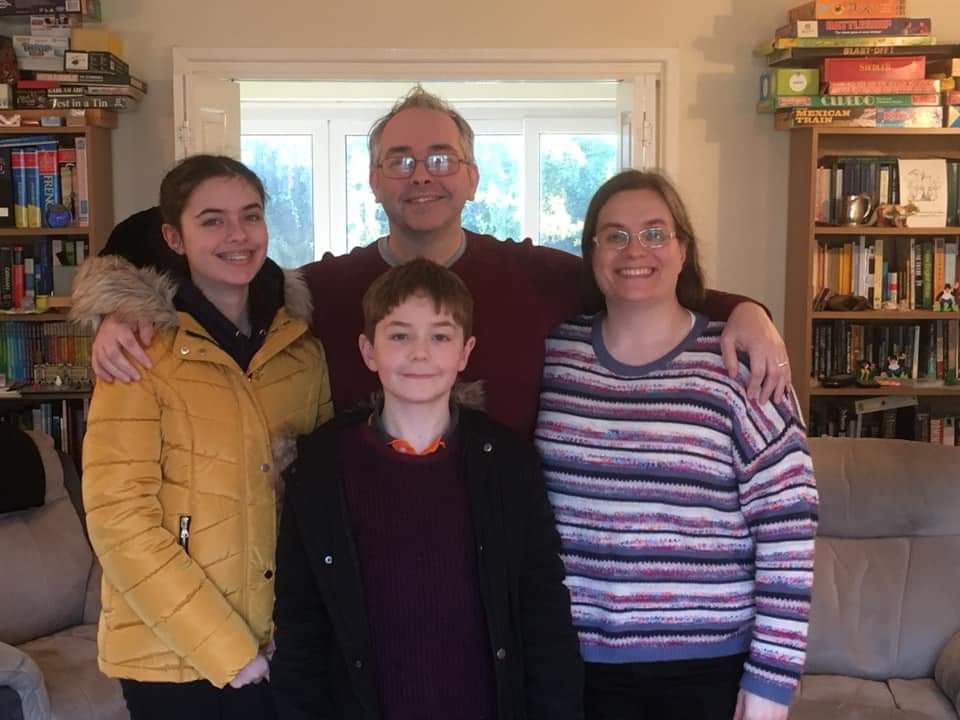 Neil and his family in January 2020

I was going up and down the stairs to see what was happening with Neil and to check on my children. I was scared but had to put on a brave front for them. They got the defibrillator out and we could hear them shouting ‘Clear!’. I was told they did three rounds of that before he properly came back to life. Neil didn’t respond to the first shock. He briefly came around after the second and then, eventually, he came around after the third.

At that point I had to get back to my work. I was working on a case and had a defendant in custody, and the police were waiting for my advice. The kids came into the office: ‘Mummy do you have to do that now?’ Fortunately, it was only for a few minutes.

Before leaving for Queen Alexandra Hospital (QA), they put Neil onto a ventilator to stabilise him. There was enough room in the ambulance for me to go too, which was a relief, so I travelled up front while the paramedics and Dr Ewan from HIOWAA travelled in the back. It must have been about an hour later because as we were driving up through Hayling Island, we passed my parents who were driving the other way.

We got to QA and they decided to bypass Accident and Emergency. We went straight up to the cardiac unit where they took him in for an angiogram, to assess the damage. The crew showed me to an empty waiting room. With the adrenaline fading, I started to cry. Dr Ewan appeared from the room where Neil was being treated. He was lovely. So calm and chatty. ‘When we put the ventilator in, Neil gagged and obviously found it uncomfortable, which is a good sign’, he told me.

Neil remained in a coma for a week. I played him a recording of my son and daughter featuring in the BBC adaption of a Christmas Carol in 2019. And that’s what woke him up. I played the music and, at first, there was nothing. I looked back up and his eyes were open. ‘Hello Neil. It’s okay, you’ve been very poorly and you’re in hospital. But don’t worry, everything will be alright. You’re getting better.’ It was just wonderful.

We learned that, whilst his heart had been stopped for 20 minutes, his brain hadn’t been getting enough oxygen, and so he suffered some brain damage. When he woke up, he didn’t know where he was. He didn’t even know who I was, which was very weird. We had to teach him lots of things from scratch, like telling the time and how to use a spoon.

Neil was moved from ICU up to the Cardiac Unit, where he stayed for three weeks, and had an implantable cardioverter-defibrillator (ICD) put in to restart his heart in case he had another cardiac arrest. A couple of days after his ICD he moved to the brain rehab ward. They wanted to make sure he could cope with everyday tasks: walk around the hospital and find his way back, navigate a computer properly, that sort of thing. They even allowed him to go down to the Chapel and play the organ several times a day. 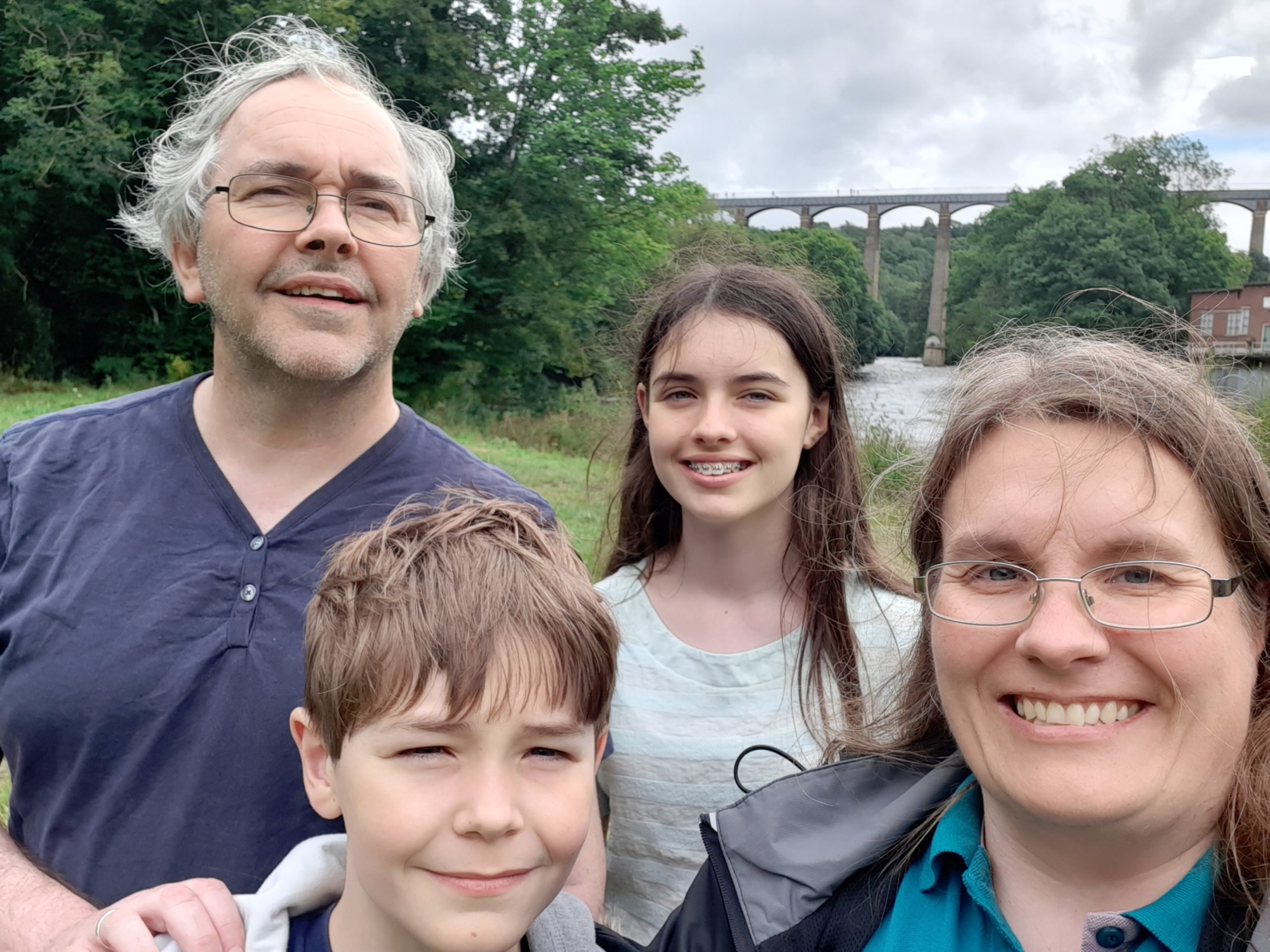 On holiday with the Pontcysyllte Aqueduct in the distance

Ten days before his birthday, a week before the first lockdown, Neil came home. He’s doing really well. He’s on a plethora of drugs and has a scar from his ICD, but his memory is pretty much back to normal. Whenever he falls asleep on the sofa, however, we all get a little bit nervy.

We are incredibly thankful and count our blessings for Neil’s recovery. There were literally hundreds of people praying for us across the whole world, and the peace that I felt was absolutely astonishing. I should have been fraught, especially whilst Neil was in a coma, but instead there was this incredible peace – in amongst the despairing tears.

Thank you to everyone. From the 999 call taker to the Air Ambulance crew, nurses and first responder. He wouldn’t be alive today if it wasn’t for you all. Thank you.