On Thursday 3rd November 2016, Jane Godden received the telephone call that every parent dreads; her daughter Maisie had been involved in a serious road traffic incident.  Here Maisie and her mother tell their story.

My name is Maisie Godden-Hall.   I’m 11 years old and I am in year 6 in St Peters Catholic Primary School, Waterlooville. I live with Mum and Dad and my older brother Morgan who is 17 and goes to Oaklands School, next door to mine.  I love everything active including; running, cross country, netball, gymnastics and horse riding. When the weather was good, I used to enjoy cycling to school and, when I wasn’t attending one of my many after school clubs, home to my grandparents at the end of the day.

The week of my accident, I celebrated my 11th birthday. It had been a busy week; I had a party on the Sunday, did trick or treating with my best friend on the Monday, celebrated my birthday on the Tuesday and went to a big firework display with my Mum on the Wednesday.

On the morning of my accident I got ready for school as usual, but I was running a bit late as I couldn’t remember where I’d put my cycle helmet. It was a strict rule that I wasn’t allowed to cycle without it, and by the time I did find it, it was later than usual.  I was cycling my regular route, which involved using the crossings and cycling on the pavement. There is a junction on my route where I generally move into the bus lane, as there is a wall that blocks the view for drivers. I was travelling quite fast to make up some time, but I realised that a car at the junction was moving out and I needed to brake hard.  I don’t remember much about the next few minutes, only what people have told me, as it all happened so fast.

As I braked, my bike stopped, but I didn’t.   I flew over the handle bars of my bike and landed in front of the car. The driver didn’t see me and, spotting a gap in the traffic, moved forward over me.  Her son was sitting in the passenger seat and saw me fall so it didn’t take long for her to realise that something had happened.

Initially I was unconscious, but an extremely kind lady who had seen everything from her car immediately stopped and ran over to me. I was so scared and frightened and my leg was hurting but she stayed with me and held my hand. I had hit the road very hard on the side of my head and had injured my face and lost a lot of teeth but she constantly reassured me.  I was trapped underneath the car and another member of the public jacked it up with the help of his son, as they were worried that it was resting on me.

I believe that at least three people called for an ambulance and the emergency services were soon on the scene. The ambulance paramedic immediately got under the car with me.  The situation was assessed and the Air Ambulance was called, as the nature of my injuries meant that I needed to be transferred to the Major Trauma Centre at University Hospital Southampton as quickly as possible.

The Air Ambulance landed in a horse paddock opposite where the accident had happened. It was a really, really scary time. I remember the Air Ambulance doctor coming under the car where I was trapped, talking to me and giving me something for the pain; he was really nice. Everyone was reassuring me that it would all be ok.  The car had to be lifted off me by the fire brigade and I was put to sleep whilst this happened.

I do remember parts of the journey in the Air Ambulance.  It was very quick and I remember seeing lots of tubes. They talked to me constantly. I was transferred to the paediatric A&E department of University Hospital Southampton where a team of 30 doctors and nurses treated me before I was transferred up to a paediatric intensive care unit where I stayed for 4 days. I had sustained 3 breaks in my pelvis, a broken collar bone, major facial injuries and the loss of 7 teeth, 5 of which were adult.

I had to lie flat in bed for two weeks and then gradually my bed was tilted up. During that time I had to be turned every 3 hrs to prevent sores and relieve pressure on my joints. I stayed in hospital until 28th November and by the time I left I was allowed to sit in a wheelchair for 1 hour, twice a day.

During my time in hospital the Air Ambulance doctor who treated me at the scene came to visit me unexpectedly. He explained all he had done that day to treat me. He pieced together the bits of information that I had in my memory to complete my story, which really helped me and my Mum. A week later, he turned up with all the crew who had helped me on the day of my accident.  I was lucky enough to meet the pilot and paramedic from the Air Ambulance and I was able to take some photos.

I progressed onto crutches just before Christmas and was walking around without crutches soon after. In January I went back to school using my wheelchair and crutches so that I could try to get back to normal again, although I was still unable to do any sport.   It’s been very tough and I’ve had a hard 5 months, but on 17th March I was finally told I that I could run again.  I still have lots of work to do on my teeth and have a nasty burn on my shoulder but everything is fixable.

I was told that, had I not been wearing my cycle helmet, I probably would have died.

I know I am only 11 years old, but I really want to use what happened to me to promote the cause for wearing cycle helmets; I think it should be law. It has been life changing for me and my family, but I survived because I was wearing a helmet. I want other people to understand that it could happen to anyone…. It happened to me.

I received a call on my mobile from the police at 9.37am on 3rd November, whilst I was at work. I was informed that my daughter had been in a serious road traffic accident and had been transferred by Air Ambulance to University Hospital Southampton.  It was a phone call that every parent hopes they will never receive. The police informed me that Maisie’s injuries were not life-threatening but life-changing, and those words still haunt me now.  My little girl wouldn’t be here now if she hadn’t been wearing her cycle helmet and yet we still see people everyday not wearing them!

There are not enough words to thank all the people who helped that day; from the general public to the emergency services and in particular the Air Ambulance. Maisie’s accident touched many people’s lives, particularly her school friends and teachers. Her head teacher was amazing, rushing to the scene of the accident and then driving to the hospital. He kept the school informed of Maisie’s progress in a caring and understanding way, always consulting us.

On a positive note, the accident has raised awareness for the incredible work of the Air Ambulance and the fact that it is a charity and reliant upon public donations. Our community and Maisie’s school wanted to help somehow and together we have organised fundraising activities ranging from collecting at carol concerts to cake baking.  The biggest fundraising event was organised by Maisie’s school.  Teachers and children from Reception to Year 6 took part in ‘A Mile for Maisie’ in order to raise money for the Air Ambulance.

As a parent, all you want to do is protect your children and keep them safe from harm, but you can’t be with them all the time and you have to let them have their independence too. Maisie has always been very strong and confident and throughout this ordeal she has been incredibly brave and positive. I know that this has made her an even stronger person. We are all so very proud of her. 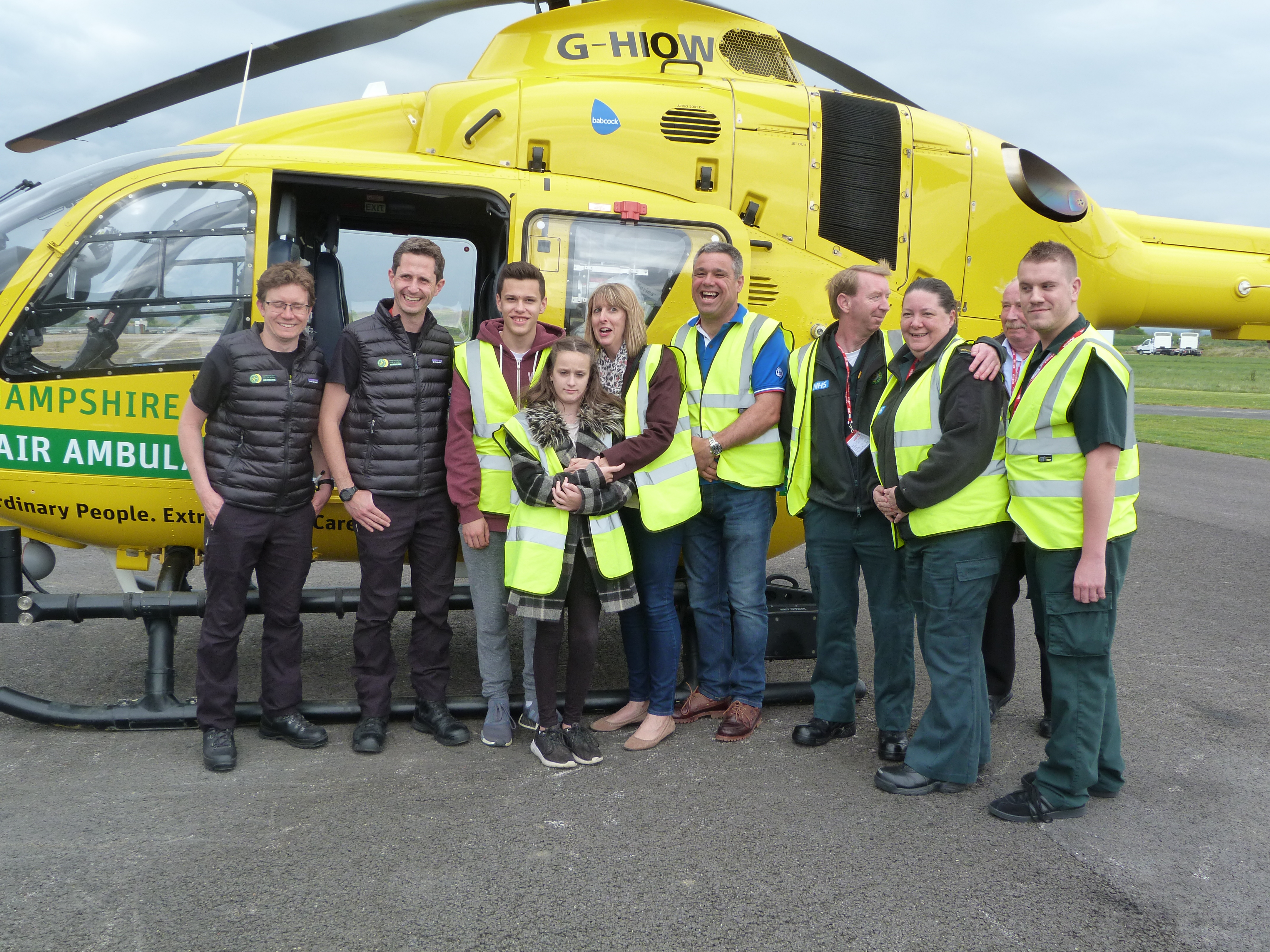 Maisie and her family visit our airbase and meet the crew who rescued her. 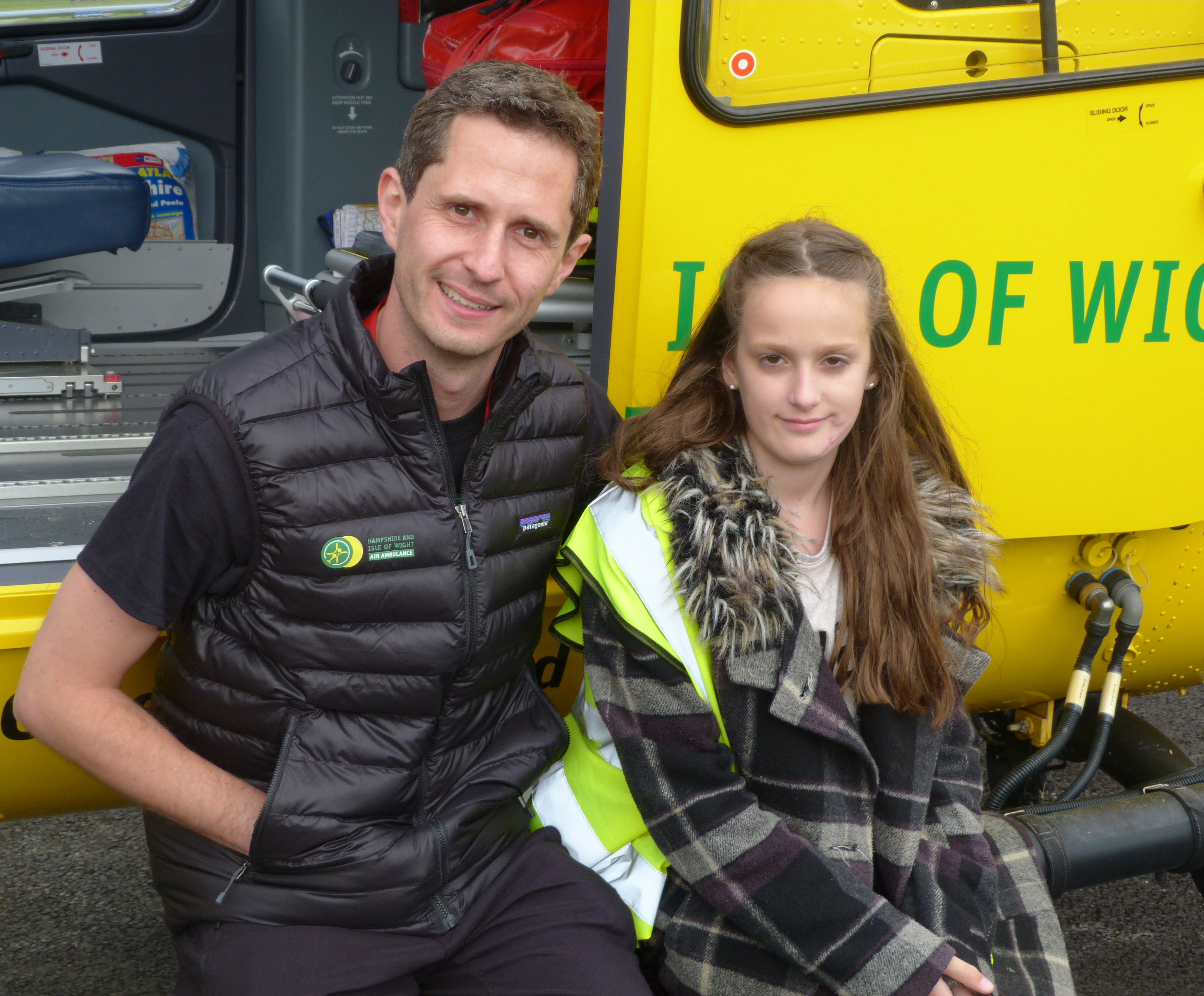 Doctor Chris Hill was on board the Air Ambulance on the day that Maisie was rescued. 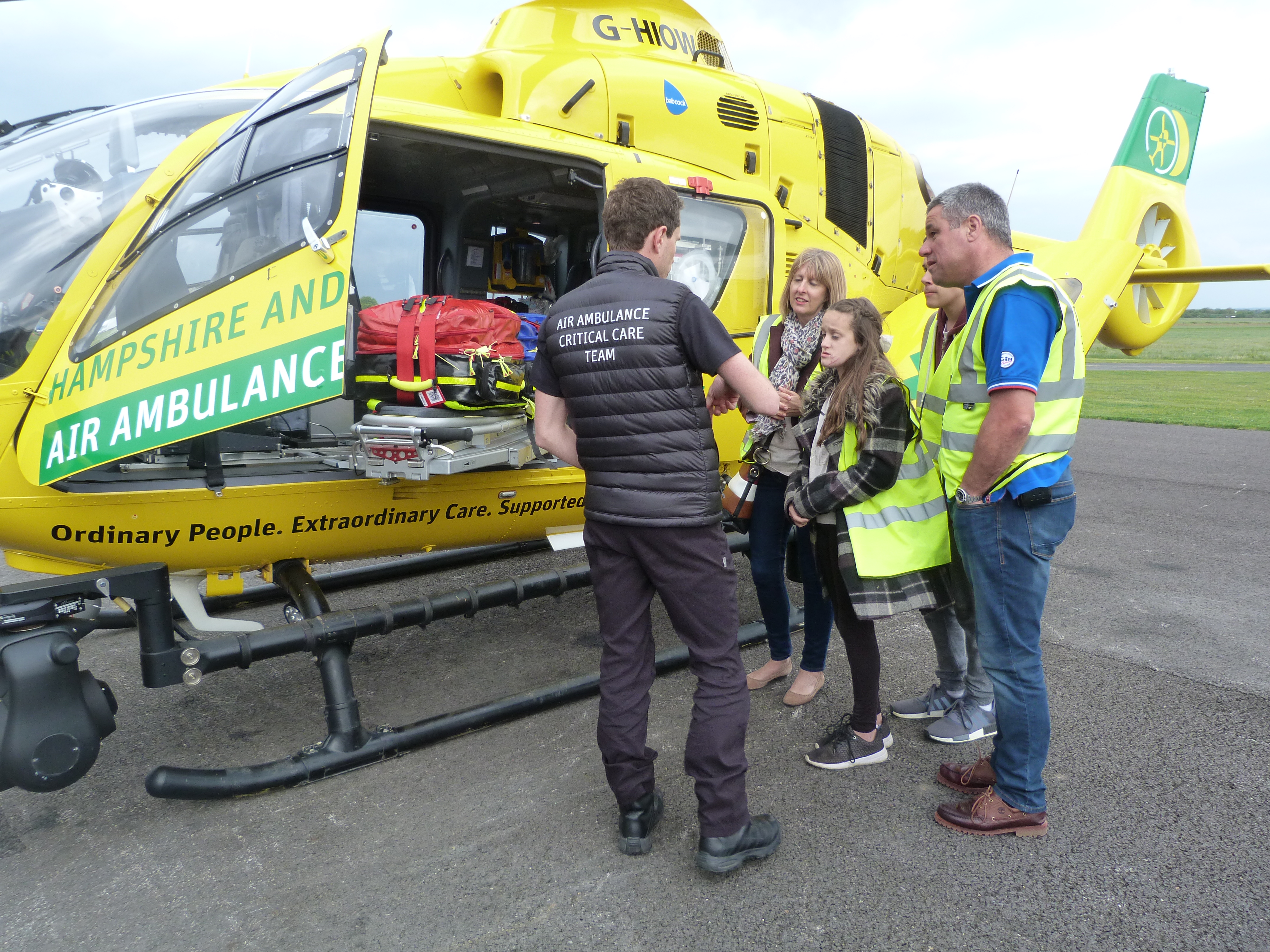 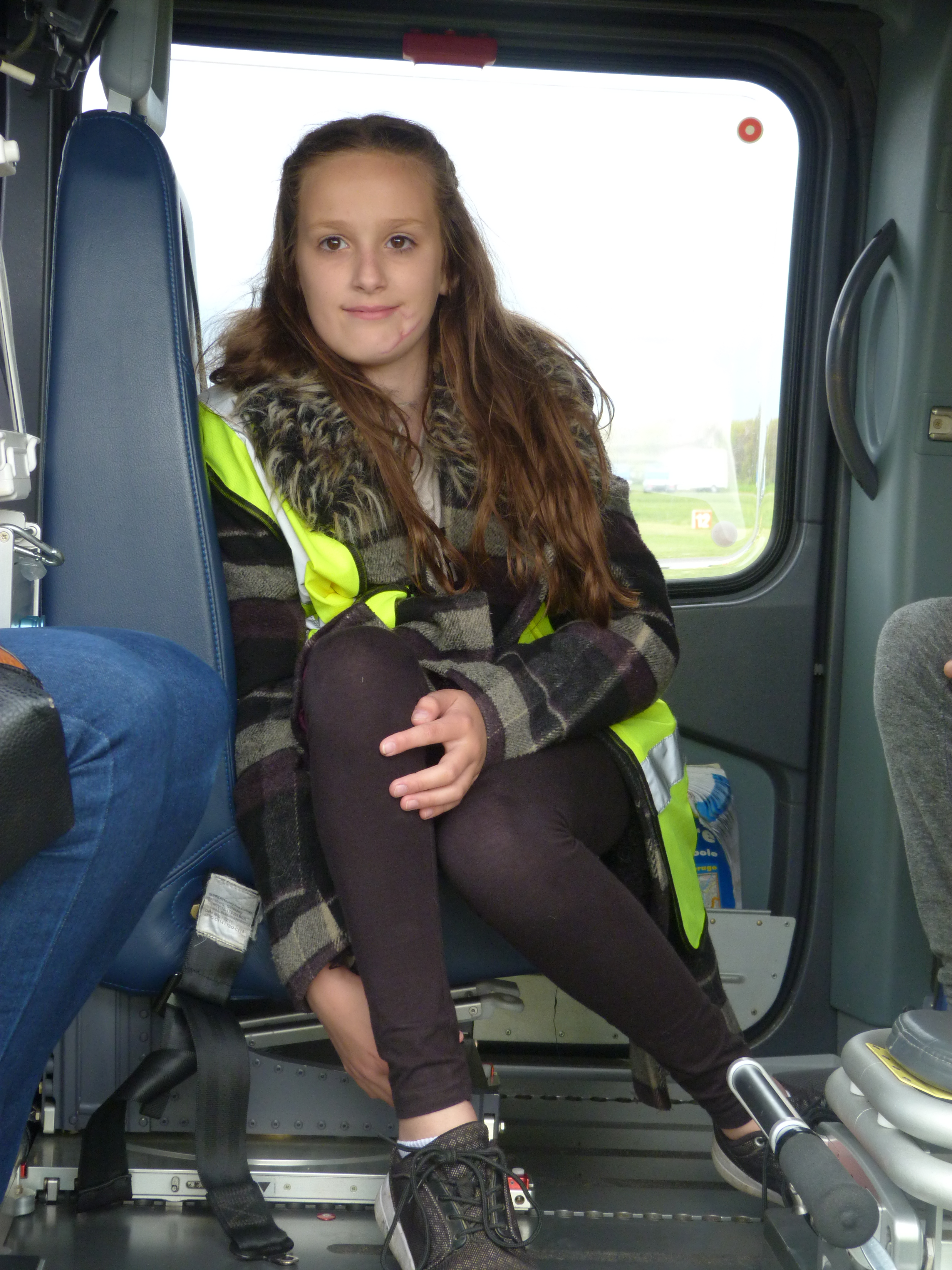 Maisie inside the Air Ambulance. 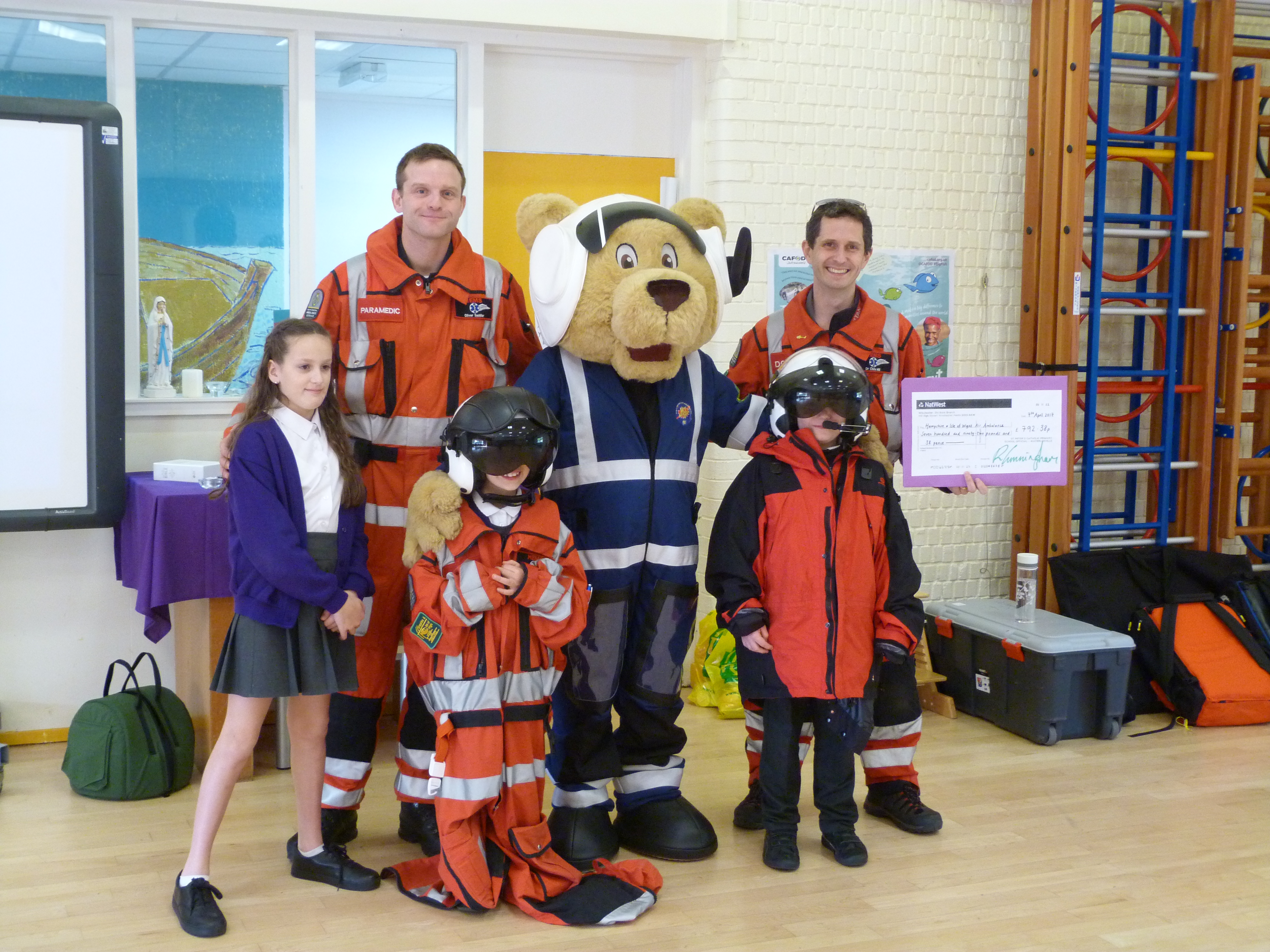 HIOWAA visits Maisie’s school with our Be a 999 Hero education programme.