Visiting the Isle of Wight for the first time, Janine and her husband Trevor from Lincoln had hardly unpacked their bags before Janine was being loaded onto our helicopter after she slipped and fell off a sea wall, hitting her head and back on the concrete steps nine feet below.

Following multiple emergency surgeries, treatments and rehabilitation, Janine miraculously survived a fractured skull, a bleed on the brain and a fractured spine. The injury to her spinal cord means Janine will be in a wheelchair for the rest of her life.

“It was just me and my husband,” said Janine, who was out for an evening stroll on Saturday 7 May 2022. “He was always walking in front of me.”

Trevor turned around to find Janine was no longer just behind him. She was gone.

She said: “I don’t want to sound dramatic, but Trevor thought I was dead. It wasn’t until I let out a groan that he learned I was alive.”

The sudden impact left Janine semi-conscious and with a large open wound to her head – which eventually required 52 stitches to hold it together. Unable to move, a local restaurant manager ran down to the beach to help.

“He took the phone off Trevor, who was trying to talk to the emergency services. He had some medical training, and apparently he was just marvellous,” said Janine.

Approximately five minutes after her fall, paramedics from the Isle of Wight Ambulance Service arrived on scene. They were closely followed by the Coastguard and the Hampshire and Isle of Wight Air Ambulance. 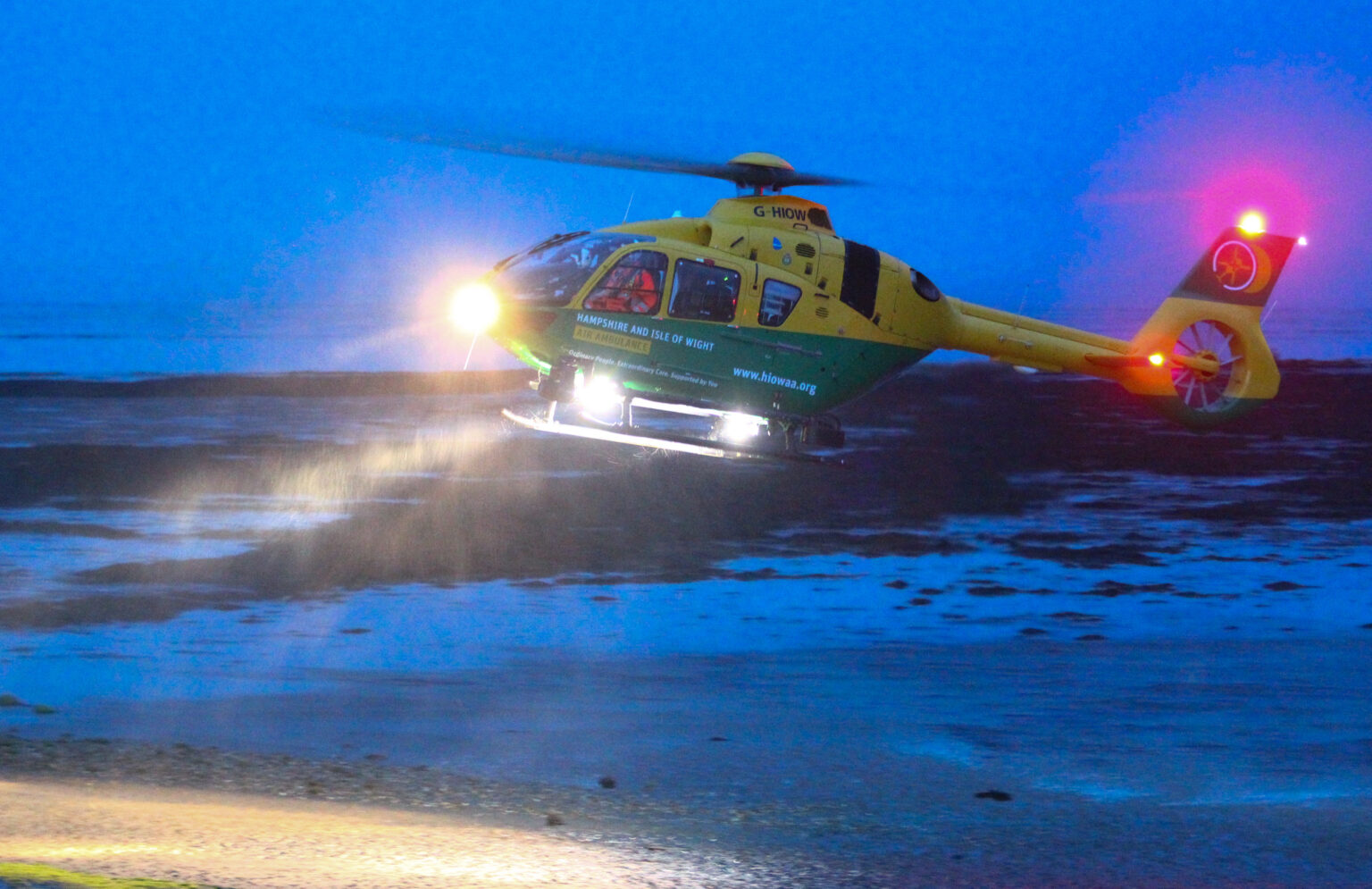 The team coming in to land on the beach (credit: Island Echo)

“Trevor held the drip, but his hand was shaking so much they had to take it off him.”

Now completely on his own, Trevor made his way back to the accommodation to pack up their bags and head for the ferry to be by Janine’s side. Following emergency surgery, Janine began her recovery in the Neurosciences Intensive Care Unit where she stayed for the next 18 days.

While Janine recovered and came to terms with what had happened, the rest of her family carried an extra burden.

“On the very same day as my fall,” said Janine, “my brother dropped down dead. Trevor couldn’t tell me for two weeks because I just wasn’t strong enough to cope with it. It was awful.”

“Life can change in the blink of an eye.”

Thanks to the help of their two children, Kate and Russ, and their partners, Darren and Katie, Janine and Trevor moved forward with positivity.

“We’ve all had to support each other and be positive all the way through. Because what else can you do?” she said.

Janine was moved from Southampton to the Sheffield Spinal Cord Injuries Unit via a hospital in Nottingham. And, on 14 September, four months after her fall, Janine returned home. 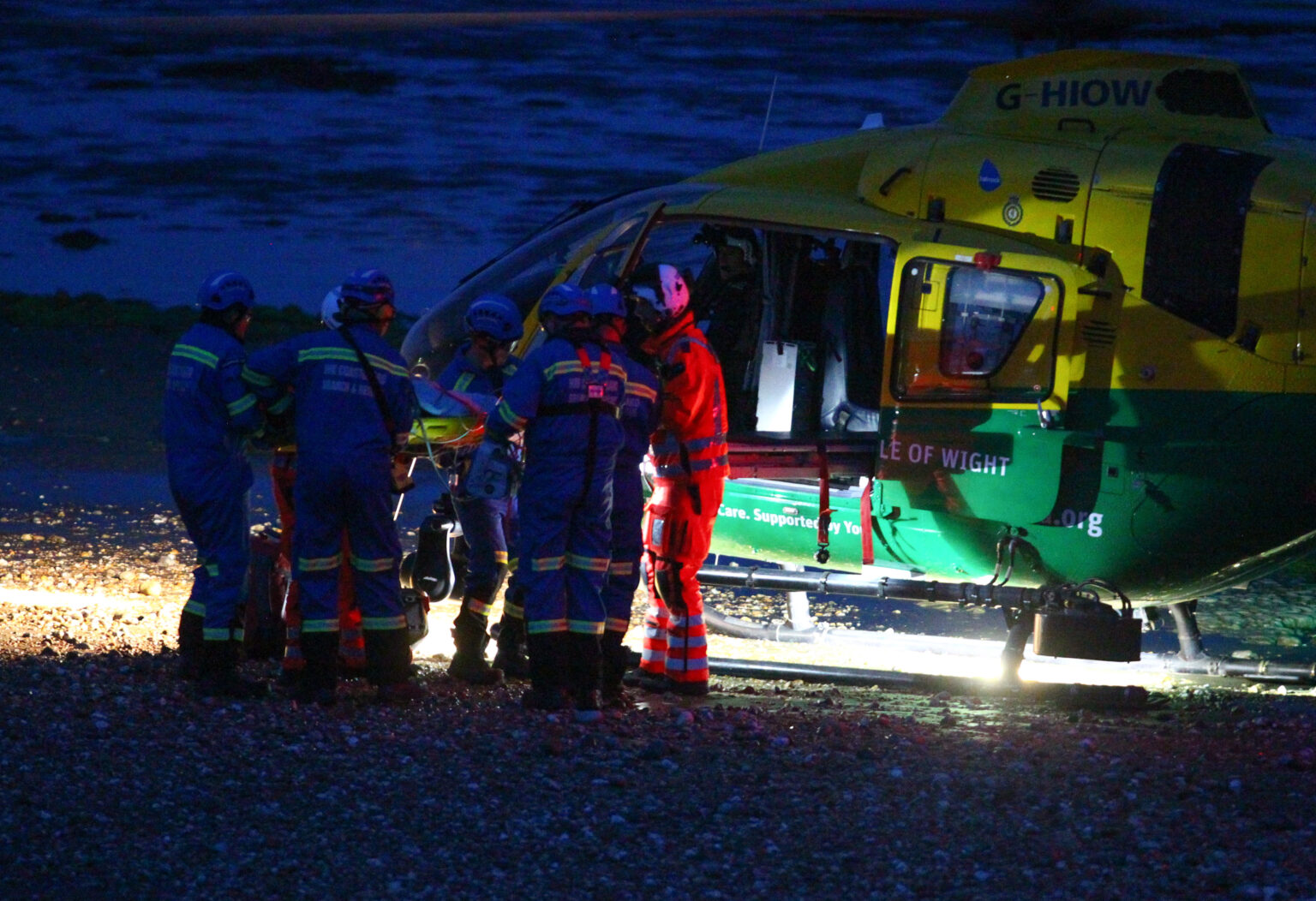 The team performed a ‘hot load’ with support from the Coastguard (credit: Island Echo)

“Now I just want to get back to the things I did before.”

A retired HR administrator, Janine was as busy in life as she had ever been. A keen volunteer gardener for her local hospice; a singer in a local choir and a proud grandparent to two boys and a girl.

“I think I’ll probably have to stop my Zumba,” says Janine. “But the rest I hope to return to.”

In September 2022, Russ dusted off his running shoes to take on the Lincoln City Centre Half Marathon to raise money for our cause.

“Kate set up a JustGiving page as a way of saying thank you. And then all these people donated. We were blown away. Some of these people we don’t even know. It’s so, so lovely.”

Russ and his family have so far raised an incredible £1,464.

Janine and Trevor are in no doubt of the impact our service has had on their lives.

“I wrote an email to the guy who came down from the restaurant saying thank you for helping to save my life. And I want to say the exact same to the Air Ambulance crew that day.”

“Trevor is sure I wouldn’t have made it without the Air Ambulance.”

Sign up to give a monthly gift today, and help us be there for patients like Janine in future. 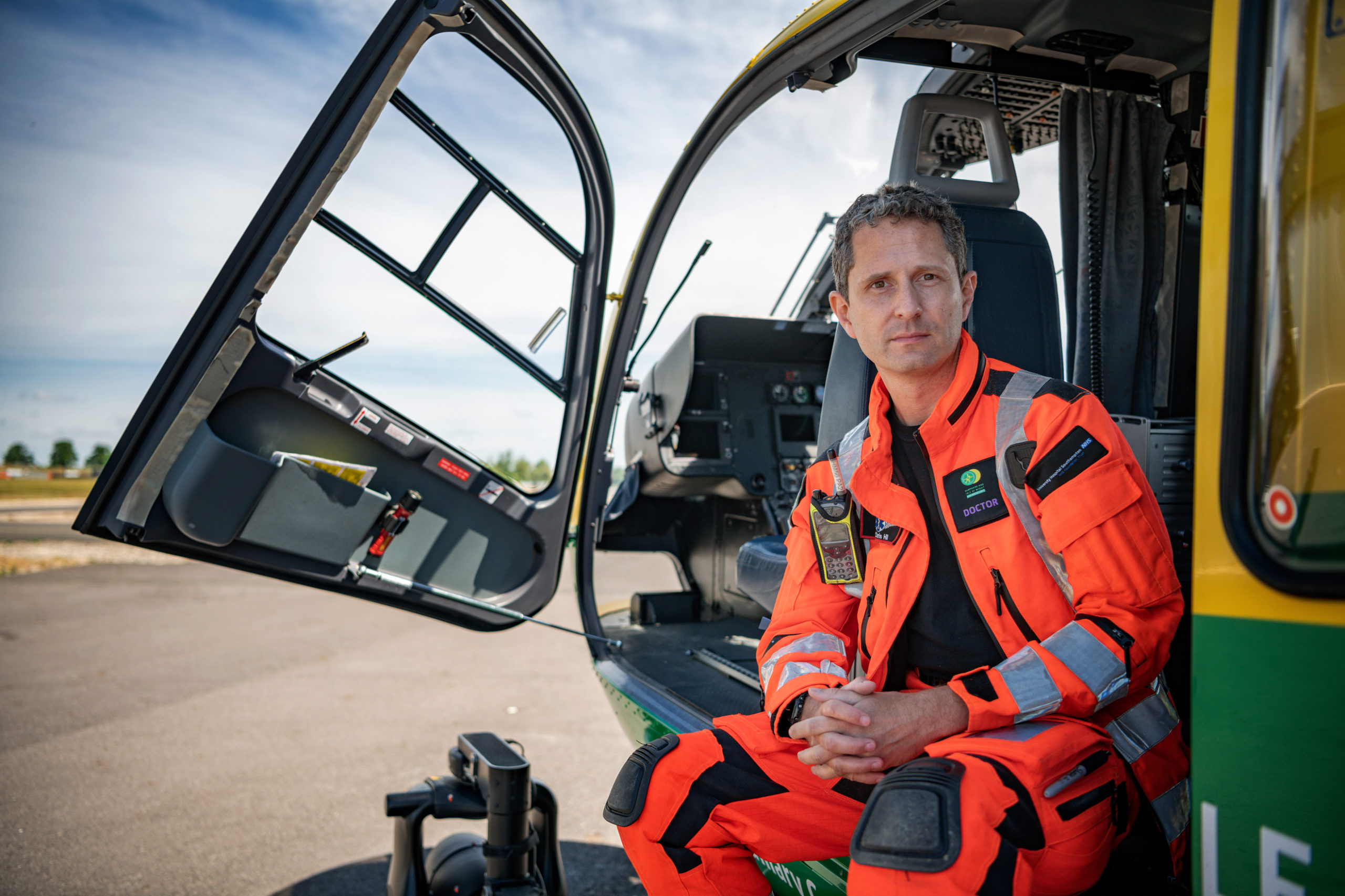 At around 7.30pm we were told about a patient who, we later found out to be Janine, had fallen from a sea wall whilst having a lovely summer evening walk having only just arrived on the Island for her holiday. The call came in and we went about planning the mission and set off.

The flight time from our base at Thruxton to the beach was approximately 20 minutes, about the furthest point we tend to regularly visit.

I remember the scene well. We couldn’t land on the beach as the tide was due to come in – we tend not to land below the tide line in case there is a problem getting going again and so landed in a nearby paddock. We assessed Janine and found her to be in a real pickle! Seriously injured and lying face down in the sand.

We went about providing her with very strong pain relief and, as we suspected she had suffered a serious spinal injury, gave her medication to improve and maintain her blood pressure.

We stabilised Janine enough to be able to roll her the right way up and plan her transfer to the local major trauma centre at University Hospital Southampton. We had the assistance of the Coastguard team along with several members of the Island’s ambulance service. And so rather than having to carry Janine back up the slope and across a field, we elected to reposition the helicopter to the beach and perform a ‘hot load’ – loading the patient whilst the engines are on and the rotors running. This requires coordination with the whole team and prior planning as communication is very difficult given the noise. Luckily the team are used to this process, as are the Coastguard teams who often do this with their helicopter.

After a short flight to Southampton, we delivered Janine to a waiting trauma team at UHS to continue her care, before cleaning everything down (there was a lot of sand) and returning to base ready for the next mission.