‘We were shouting for him to come back and that he couldn’t die now, but it was a losing battle. I was so scared. There was nothing more that she could do; she couldn’t keep him alive any longer.’

In the summer of July 2021, Gary and his wife Penny packed their bags and headed off to the Isle of Wight to visit some friends and family. The couple, who have been married for 33 years, initially met in London, before moving to Eastleigh where their son and daughter live close by. When Gary’s heart stopped during their holiday to the Island, Penny was by Gary’s side as the events unfolded. Below, they tell their story.

‘In the morning me and my friend were going to go kayaking — it would have been a totally different story then,’ says Gary. Penny’s niece had recommended a cider farm and pub that was nearby, ‘So we decided to go to the pub instead.’ 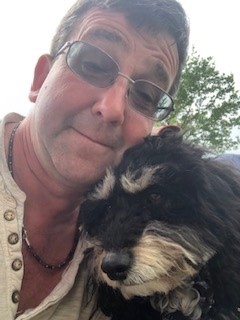 ‘I can’t remember much about it. They tell me I wasn’t quite being myself beforehand, so maybe something was already happening,’ says Gary.

When they stopped for some lunch in the pub with their two friends, Colin and Helen, in Godshill, Gary suddenly collapsed to the floor and had gone into cardiac arrest. ‘He was turning blue and we couldn’t find a pulse — it was very frightening,’ recalls Penny. One of their friend’s commenced CPR, but there was no sign of Gary responding.

Two nurses who happened to be in the pub and saw the commotion rushed to Gary’s side. Gemma and Jo, ‘absolute life-savers’ Penny calls them, took over CPR.

‘We were shouting for him to come back and that he couldn’t die now.’ 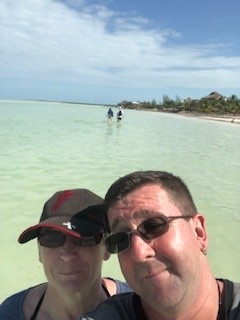 ‘But it was just a losing battle. I was so scared. There was nothing more that she (the nurse) could do; she couldn’t keep him alive any longer.’

Moments later, paramedics and doctors from Hampshire and Isle of Wight Air Ambulance touched down arrived on scene.

‘They were amazing — they took over the situation and they just knew what to do. They were so professional and caring, keeping me informed of everything they were doing to Gary.’

The team took over CPR and loaded Gary onto the helicopter before flying him to University Hospital Southampton.

Gary was discharged after five long weeks with an implantable cardioverter defibrillator (ICD) fitted, which monitors the heart in case of similar incidents in future.

‘Without them, I wouldn’t be here today,’ says Gary, ‘there’s no way I would have survived.’

‘Without the Air Ambulance so many people would have lost their lives. And this has really brought it home. We didn’t realise it was a charity: we always thought it was Government funded. But we know how much they need our support.’

‘Thank God for the Air Ambulance, for Jo and for Gemma. Thankfully, it just wasn’t Gary’s time.’

You can make a difference to people like Gary by becoming part of the Hampshire and Isle of Wight Air Ambulance family.

October 15, 2021
DONATE
We use cookies on our website to give you the most relevant experience by remembering your preferences and repeat visits. By clicking “Accept All”, you consent to the use of ALL the cookies. However, you may visit "Cookie Settings" to provide a controlled consent.
Cookie SettingsAccept All
Manage consent