Kate McBain tells us about the day that HIOWAA saved the life of her three-year-old grandson.

Kate, or ‘Narna’ as she is known these days, has always been close to her grandchildren, including Joshie, her three-year-old grandson. A triathlon coach and swimming teacher, she competed in her first triathlon when she was fifty and leads a busy and active life, juggling work, childcare and sporting events.

Thursday November 9th, 2017 was a normal Thursday. Kate’s daughter Emma was at work and Kate picked Joshie up from playschool and took him to Finkley Down Farm to play, as usual. Kate remembers that Joshie was particularly tired that day, and that he slept more than usual.

“I woke him up and he sat on my knee for about an hour and a half, which was just lovely. We had a bit of a cuddle’” she remembers.

A little later, Kate went to pick up Joshie’s sister from school and dropped both children back at home with Emma, before heading off to a parents’ evening for her youngest son, Jack.

She was supposed to be at a coaching event that evening, and it was only when she got a call from a fellow coach that she realised that it had slipped her mind; “For some reason, I forgot all about it. I never do that.”

She was about to head straight off when the call came through from Emma. Joshie had been involved in an accident and there was an Air Ambulance at the house.  “I couldn’t really believe it as I had only left him an hour earlier.”

Kate had no idea what was happening, or where she was going to, as she jumped into the car with her daughter Becky. When Emma called and told her that she was getting a police escort to University Hospital Southampton, and that Kate should go straight to the hospital herself to meet the Air Ambulance, she feared the worst.

“I got to the hospital as the Air Ambulance was landing and the trauma team were waiting. I was frightened. At this stage, I just wanted to see Emma.”

It was in the Relatives’ Room that Kate finally met up with Emma and learned what had happened earlier.  Emma had been at home with the children and her partner Rhys. Rhys and the children were playing; the usual rough and tumble, when Joshie had reached up to the fireplace for his ‘snuggle blanket’, and somehow the fireplace had come away, falling on his head.

Emma called for an ambulance, the operator calmly talking her through what to do. Doctor Simon Hughes and Critical Care Paramedic Oli Saddler had been due to finish their shift on the HIOWAA Critical Care Team Vehicle not long before, but when the call came through, they drove straight to the scene, arriving within minutes.

“They were both incredible; it would have been a very different story if they hadn’t been there. Dr Hughes took control and immediately Emma’s panic subsided; the sense of relief was immense. At one point, he asked Emma to leave the room and write down everything that had happened in the run up to the accident. It was only afterwards that I realised he had no intention of using her account; he simply wanted to remove her from a very stressful situation.”

Joshie was taken to UHS in the Air Ambulance, which had landed in a playing field nearby.

“As soon as we got to the hospital and saw the surgeon, we knew how serious it was. The surgeon told us he would do all he could for Joshie.”

Joshie spent two and a half weeks in an induced coma in intensive care before he was moved to the neuro ward and finally discharged from hospital three months later, on February 9th. Thanks to the facilities at Ronald Macdonald House, Emma and Kate were able to stay at the hospital themselves throughout Joshie’s time there.

“I had to be there; it was too much for Emma to have to deal with alone. I would have slept in the car if I couldn’t have stayed at the hospital.”

During that time, Joshie had extensive therapy, eventually learning to walk and to talk again. He didn’t need surgery at the time, because his skull was fractured, but he has since had further surgery to repair the fracture.

Here’s Joshie meeting them again at the airbase: 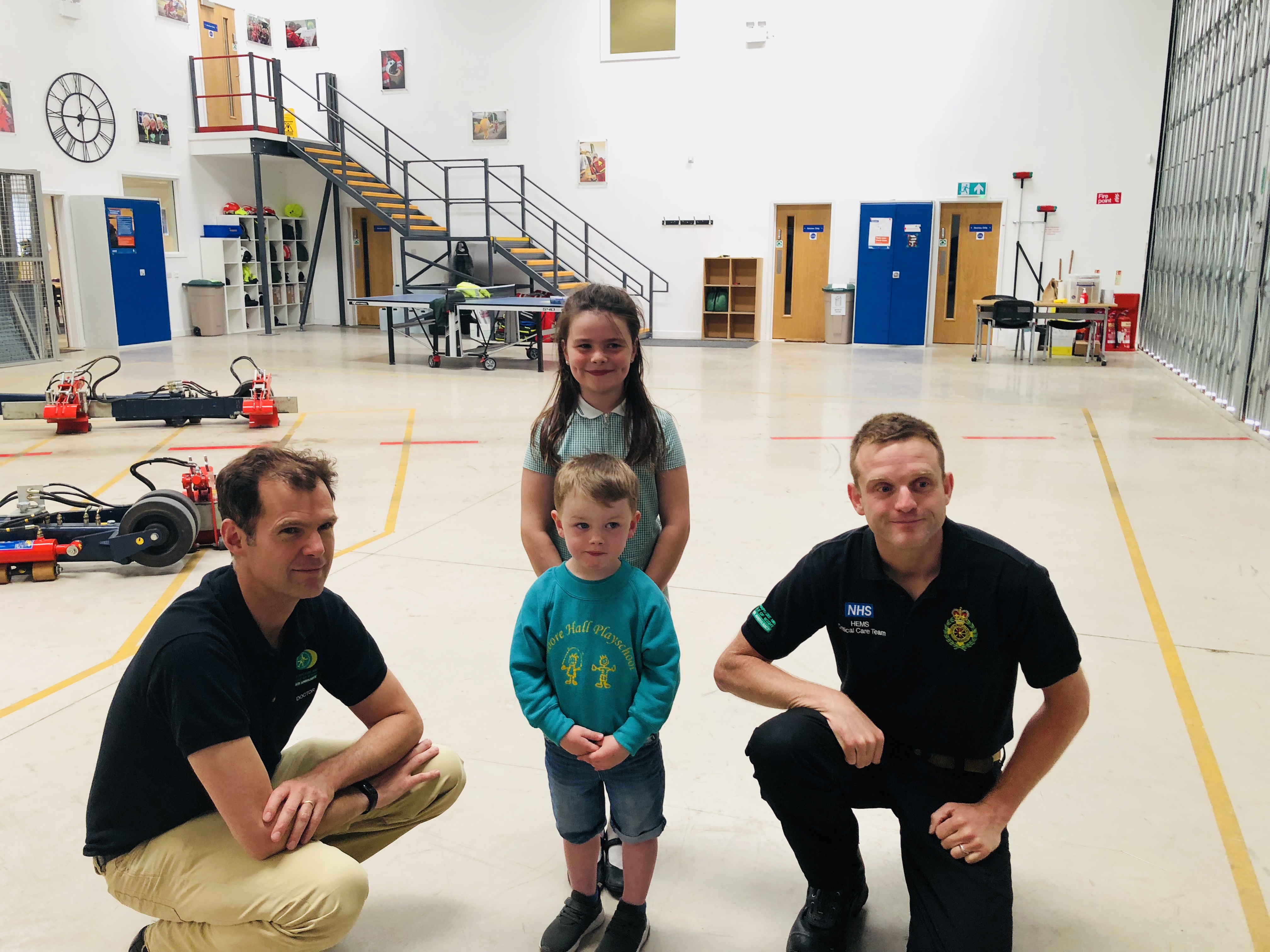 Today Joshie is a normal three-year-old little boy and has no concept of what happened that day.

“I don’t think they expected him to be as well as he was. The teams in intensive care were brilliant and he just got better and better.”

Since Joshie’s accident, his family have come together to raise money for HIOWAA. Kate herself has run a half marathon and undertaken a six-hour swim challenge and a bike ride. She has every intention of continuing her fundraising. She told us that she was horrified to hear that the Air Ambulance relies upon public donations.

“We had no idea the Air Ambulance is not funded by government. It came as quite a shock to hear that. Simon and Oli will always be our heroes. The team were crucial to saving Joshie’s life; without Simon and Oli, the outcome would have been very different. Joshie’s accident has changed me as a person; it’s changed my concept of everything. I no longer take things for granted. Family is everything.”

August 15, 2022
DONATE
We use cookies on our website to give you the most relevant experience by remembering your preferences and repeat visits. By clicking “Accept All”, you consent to the use of ALL the cookies. However, you may visit "Cookie Settings" to provide a controlled consent.
Cookie SettingsAccept All
Manage consent