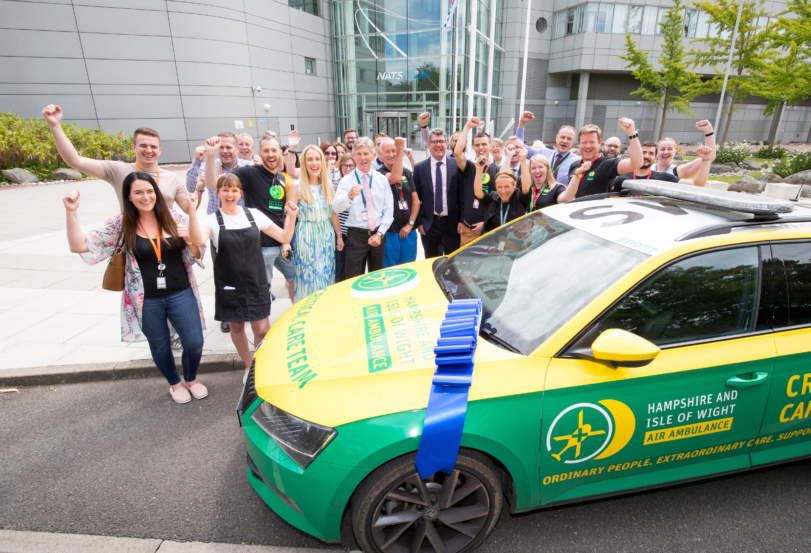 On Friday 5th July, employees at air traffic control centre NATS Swanwick, celebrated hitting their fundraising target of £50,000 for Hampshire and Isle of Wight Air Ambulance (HIOWAA). The money raised will go towards funding one of the three Critical Care Team Vehicles (CCTV) now operated by the life-saving Charity.

Crewed by a team of pre-hospital emergency medicine doctors and paramedics, the Critical Care Team Vehicles (CCTV) provide the same enhanced care as the Air Ambulance and enable HIOWAA to get to more difficult to reach urban areas. The vehicles also provide operational resilience when the aircraft cannot fly due to adverse weather conditions.

Employees at NATS Swanwick selected HIOWAA as their Charity of choice in January 2018 and celebrated hitting the £50,000 milestone by unveiling the new vehicle at a joint event with the Charity, which concluded over a year’s worth of fundraising activities.

These activities included: climbing Mount Snowdon, taking part in the Southampton Airport Runway Run, abseiling down the Spinnaker Tower, and a charity car wash. Contributions also came from employees donating directly to the Charity from their salaries each month.

“We are thrilled to have hit our fundraising target for Hampshire and Isle of Wight Air Ambulance. The Air Ambulance provides a vital service to the south coast region and is also a Charity that is very close to the hearts of many of our employees here at the NATS Swanwick centre.
He added: “The work that the HIOWAA team does in the local community is outstanding and we have had such a great time partnering with them over the past two years, raising money to support the fantastic work that they do. We are really proud to have played a part in helping them to continue the important life-saving job that they do.”

“The overwhelming support that we have received from NATS Swanwick has allowed us to respond to patient demand across our region, by adding to our fleet of vehicles.
Since our first CCTV became operational in 2017, mission numbers have doubled, with May 2019 being the busiest month on record for our life-saving service.”