Last year we rescued Janette Houghton after she was involved in a serious road traffic accident on her way to work.  Janette’s accident took place in Northamptonshire, and as both local Air Ambulance crews were out on other calls, the Hampshire and Isle of Wight Air Ambulance was called to the scene.  On the aircraft that day were Paramedic Paul Rock, Pilot Dave Nicholls and ICU Consultant Gordon Craig.

Janette is a probate lawyer at a High Street practice and is a married mother of two children aged seven and four.

On the morning of my accident I had just dropped my eldest daughter, who had just turned seven, at her school breakfast club. I usually drop her at 7.45am so that I can start work early and finish by 2.30pm and spend the rest of the day with both my daughters.

I was travelling towards Woodford, Northamptonshire, and was heading up a hill when a car came round the bend at the top of the hill on my side of the road. I didn’t really have time to react, but I remember considering the left side of the road where there was a ditch and feared that, if I went to the right side of the road, the other driver might suddenly swerve to correct themselves. This all happened in a couple of seconds when I realised with horror that the car was going to hit me. I remember hearing an enormous bang and the force of being moved around on the road.

When the car stopped moving, I thought I had been pushed over to the right side of the road, but I now know that I had been turned around 180 degrees, facing back in the direction I was coming from. I took a huge breath and screamed out of the window at the top of my lungs, partly due to pain, partly due to shock, and I think partly out of anger about what had just happened. After about three screams I decided to start shouting for help and to do something more constructive with my strength.

A woman came running across the field and told me that she had called an ambulance and that help was on the way. Once I stopped shouting I realised that my knees and hips were extremely painful and the fascia of the panel below the steering column was pressing very hard against my knees and pushing my legs into the seat. I reached down to the chair release bar and released the seat so that I could take the pressure off my knees, which felt so much better.

A man also came to my aid; he came up to the window next to me and reassured me, telling me that everything was ok and that the ambulance was on its way. He had been driving in the opposite direction and had just passed me when the accident happened, and he saw the glass, dust and debris flying up in the air in his rear view mirror.  Another passer-by, who had been cycling near to the scene, was an off-duty paramedic. He stopped to help and assess me, asking me where I was in pain. I remember saying that my knees and hips were very painful. He got in the back of the car and held my head to support my neck. My chest was also quite painful.

The local ambulance crew arrived after about 10 minutes, followed by the fire crews, who put up a canvass to stop the shattered windscreen falling on to me if it fell away from its frame. They began cutting off the driver’s door and the rear driver’s side door, which was partially buckled and stuck.

The crew were discussing contacting the local Air Ambulance services, both of which were out on calls. The fire crew were working on taking off the roof of my car so that I could slide up a back board and out that way. During the discussions, I presume that a call was put out to see if there were any other Air Ambulance crews available. Although I was in the car for two hours in total, because I was stable, they were in no hurry to take me out of the car. By the time it was safe enough to extract me from the car, the Air Ambulance had touched down and the crew were at the roadside. My husband told me later that it was the Hampshire and Isle of Wight Air Ambulance.

The Air Ambulance landed in the field adjacent to the road, and I was carried by stretcher down the hill to the field. 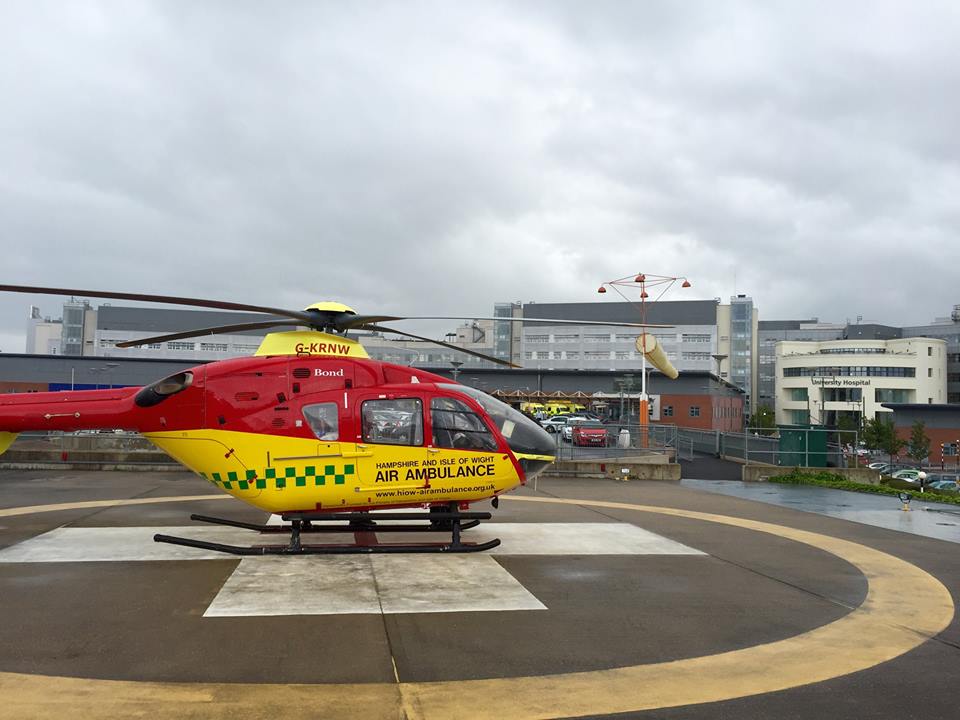 Luckily, I was the only one in the car at the time of the accident. I was in quite a lot of pain, even though I was attached to a drip with a dose of morphine. I knew that I had to place myself in the hands of the professionals who were there to help me. I concentrated on breathing slowly and staying calm. When my husband arrived at the scene, his first thought was how I had survived the accident. The paramedic leading the scene told him that I was stable, but he still wondered if I would survive.

The ambulance crew were insistent that I travelled by Air Ambulance, and not by road, which led me to believe that this would increase my chances of survival. I was told by several doctors that I was lucky to have survived the accident and I have the Air Ambulance to thank for this because they got me to hospital so quickly. My journey by air took 20 minutes, compared to my husband’s 90 minute journey by car.

Although I remember everything about the crash, once I was freed from the car I was given ketamine so things became a bit hazy.  I came round during the flight and looked around to find two people wearing helmets and headsets behind me!  One gave me a thumbs up, which I returned. The next thing I remember was arriving at the hospital and being wheeled from the Air Ambulance through the doors to be assessed.

My recovery is ongoing. I was in Coventry for two and a half weeks before being transferred to Kettering General Hospital, which is nearer to my home. I was there for another two weeks and then transferred to a rehabilitation unit for a further two and a half weeks. I was discharged home on the 11th August. I have hydrotherapy and physiotherapy once a week. My legs were in braces for six weeks so the big battle, apart from getting my strength back, has been getting my knees to bend. Recently, the bend in my knees was measured at 100 degrees in my right knee and 80 degrees in my left, which is a far cry from being able to kneel sitting on my heels, as I did before. I have another 6-12 months of therapy ahead of me, and who knows what my long-term mobility will be like after that.

It was very hard for my young daughters, as they didn’t see me for nearly two weeks. My eldest daughter had graphic nightmares about me dying and my youngest daughter was very wary of me when she first visited. It’s been hard for my husband looking after our daughters, getting one to school and another to nursery and then visiting me. Although he had 5 weeks off work, he had to return to work in early August, whilst I was still in the rehabilitation unit.

I have been very determined to remain positive and to get as much mobility and flexibility back as possible. I look forward to the morning when I wake up and get out of bed without being stiff and in pain. You never know how long you have left so it’s important to enjoy life. We threw a party at our house on the 28th December and invited every friend or family member who either visited me in hospital to keep my spirits up or who helped out in practical ways when I was stuck in hospital or at home unable to get out and about. My accident has made me focus on doing the important things in life, rather than putting things off for later years. Of course, a busy life tries to pull you away from spending time with the people who are important to you, but now I cherish listening to my four year old chatting away about her ‘My Little Pony’ figurines, or having a chat with my seven year old about her day at school.

I hope never to use the Air Ambulance again, but there is no doubt in my mind that, in my case, it made the difference between life and death. The firm I work for have previously supported the Northants and Warwickshire Air Ambulance at Christmas and through ‘Wills Week’, as we feel strongly that it is a valuable service, which must not be allowed to fail due to lack of cash.