Train hard to fight easy. Something our crew live by to ensure they’re ready for any scenario they may face.

On Tuesday 30 November, we were delighted to attend a major incident simulation on the Isle of Wight as part of the training faculty. Two of our clinicians, Dr Rob Summerhayes and Dr Matt Kerton, attended on behalf of our service. Dr Summerhayes explains what the team got up to.

“A major incident can be defined as any incident where the location, number, severity or type of live casualties, requires extraordinary resources, and this certainly fitted that definition.

In the pitch-black darkness at around 18.30, we received 999 calls from two casualties on the wet and windy hillside of the Isle of Wight chalk downs. Within minutes a major incident was declared. Resources from the Isle of Wight Ambulance Service, Fire and Rescue and Coastguard were tasked.

On the night in question the weather was too bad for our helicopter to fly to scene. We were, therefore, involved as the training faculty rather than responding as a critical care asset.

A driver of a car had veered off a track, down a steep escarpment and crashed into a second car. There were eight casualties in total – all volunteers covered in fake blood and bruises. All had been seriously injured, including two that had been thrown from their vehicles – one of which was now on its roof. 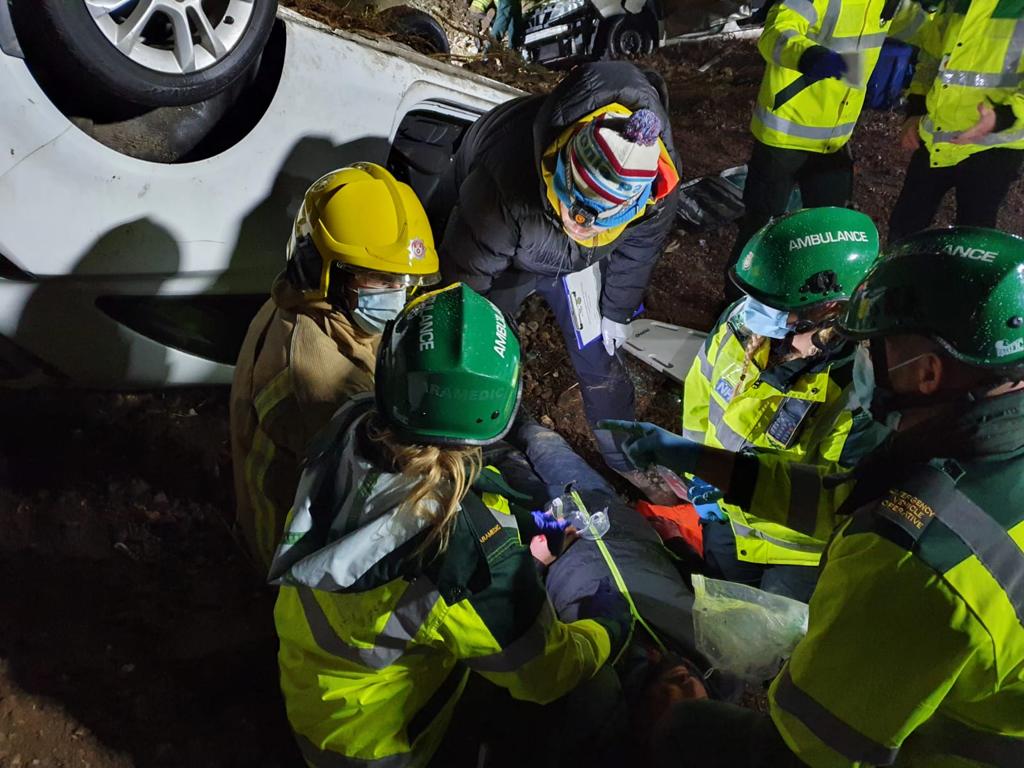 I was allocated as a member of the faculty to a seriously injured casualty who had been thrown from the car. This gave me the opportunity to both watch what happened to my individual patient and get an overview of the scene.

The ambulance service triaged and treated the casualties. And the fire crews made the scene safe and facilitated the rescue of patients from the two wrecked cars by stabilising the vehicles and cutting away the doors. The Coastguard ground and air crews worked together to facilitate a safe landing of the Search and Rescue Helicopter and the subsequent extrication of casualties.

It was a privilege to be part of such an incredible team of around 80 emergency service personnel, all working together to provide the best possible life-saving care to these severely injured patients in very difficult circumstances. It is vital that we train together in this way so we are familiar with the difficulties of managing multiple severely injured patients in the pre-hospital environment.

Training in simulated major incidents of this nature allows us to be calm, logical and systematic when we are tasked to similar real-life incidents. People often ask how we function at scenes: it is because we have trained hard for it in realistic conditions.

Thank you to the Isle of Wight team for the huge amount of work they put into organising this very valuable training exercise.”